Here are some old Amiga Floppy disks used by HarmonySoft for the creation of Rashumon and other Amiga products. 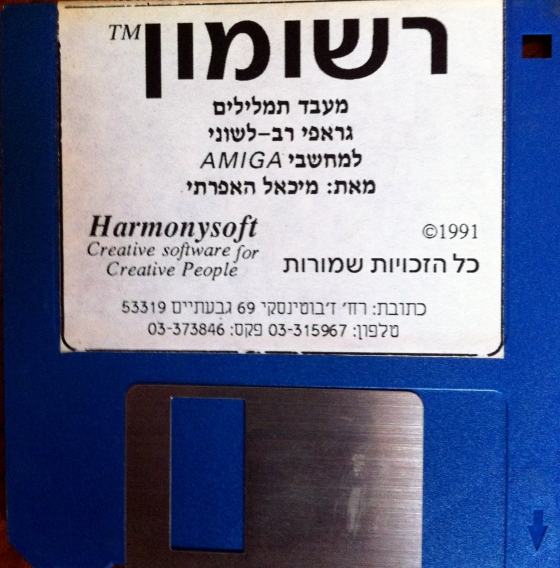 This is how Rashumon was sold… 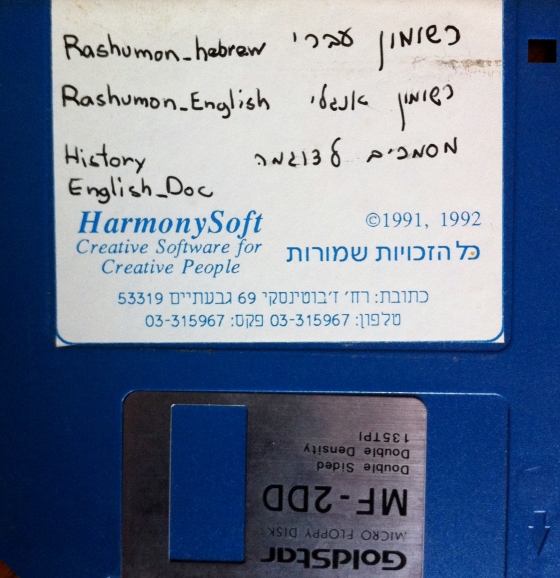 => This HarmonySoft floppy disk was for internal use

This type of floppy disks was used for development and backing up. In fact, without these floppy disks, I wouldn’t been able to have all source codes and applicaitons in my possession today…

And finally some work related to other programs and products:

During 1989, while developing Rashumon, I found myself looking for a copy protection solution for Amiga software but there wasn’t any. The Amiga had a very non standard Parallel port, which made it impossible to just adopt a copy protection dongle from other platforms, and there was a need to develop a completely new system.

Hardware based copy protection systems are based on a hardware device which interact with the computer using the port assigned to it. Back then (1989), the USB wasn’t invented yet, and the Parallel port was used. The Parallel port was the port used for printers for many years, and therefore any dongle would need to have “pass through” connector allowing the printer to be connected to it, instead to the port directly.

Hardware based copy protection requires interaction with the device through most of the connector pins, being able to read each pin’s value, and to change each pin’s value from 0 to 1 and vice versa. The Amiga didn’t provide any API to do so, which made me look for undocumented features, and code directly to the hardware instead of using any existing SDK.

With the help of Shimon Groper, the founder of Eliashim, I have made many attempts to create a dongle compatible with the unique and undocumented hardware. I used to go from Tel-Aviv to Haifa, and after several hours, leave with a box, covered with many wires in all colors, which was supposed to be the prototype… Eventually I found the way to implement the first Amiga based copy protection dongle and instead of buying bulk dongles from Aladdin Knowledge Systems, I have accepted the kind offer of Yankee Margalit, their founder and CEO, to by the Amiga product from my small software house (HarmonySoft), and after a short period of negotiation, Aladdin paid me $12,000 and my product became the AmigaHASP.

An Italian magazine published an article about the AmigaHASP: 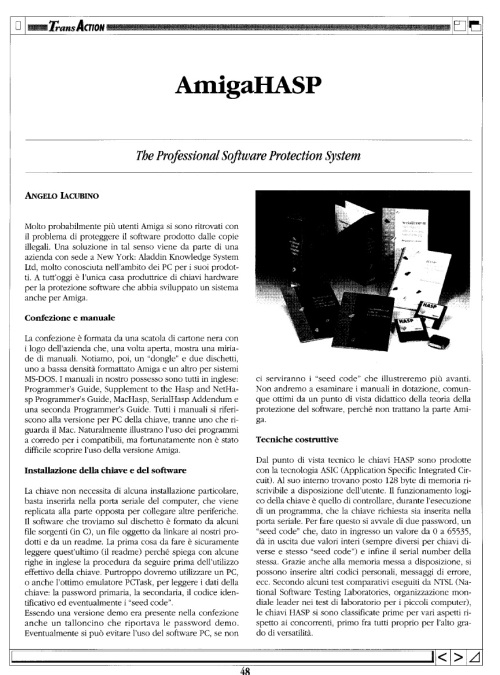 As part of the deal, I have trained the technical people from Aladdin about programming the Amiga, and even gave them Amiga books and magazines. We have announced the new product, and if Commodore wouldn’t have gone out of business, short after, the AmigaHASP would have probably been useful for many Amiga based software houses. I can tell from my own experience, that it was used for Rashumon, the multi lingual graphic word processor I have developed.

During 1987 I have developed a script language to code music for the Amiga.

The project was called Musicode. My idea was to create something similar to a “Basic” like programming language, which will focus in music. The Amiga was known  by it’s ability to play polyphonic sound, based on 4 seperate tracks (which was a lot these days…). At that time I was involved in computers and music projects, such as music based on random numbers or representing digital artwork as music.

The demo disk contained the application itself, and a sample script with some music I have composed, as a demo for Yaacov Agam who was always (and still is) open minded to such ideas and ventures. 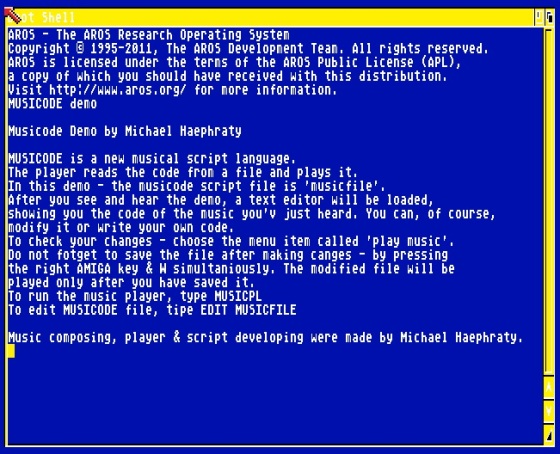 This screenshot was created by running Musicode on WinUAE (Windows Amiga Emulator) along with AROS alternative Amiga OS. 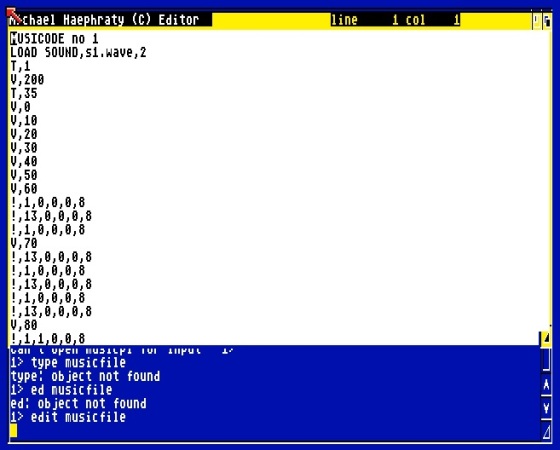 Few months later, I have gone one step further and developed a graphic user interface for my music engine.

The idea behind MusicPro was to make music composing available to ordinary people, same as composing a document using a Word Processor has became. To do so, I tried to build an engine and a very intuitive user interface that will allow the avarage user to unleash his or her creativity without having to have any musical knowledge.

This idea was later (1994) introduced by me to Microsoft, during an interview by Edith F. Rothenberg, at Microsoft Research, who have considered recruiting me back then (while I worked as a Contructor with Apple). She liked the idea, but Microsoft weren’t looking to invest in the MS Office equivalent to a Music compusing “word processor”…

At that time (1998), there were several creative music composing applications for the Amiga, among them one called “M”. I wrote about that period of my life in this article (Hebrew).

I was thinking about something different. First, to make it simple, intuitive and with out requiring any knowledge in music, and second, encapsulate as much as music knowledge within the system, much like a “spell checker” for the music being composed. 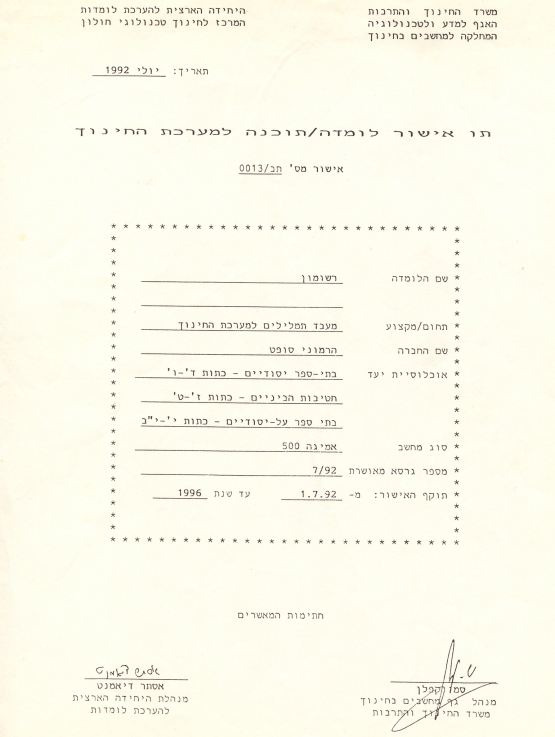 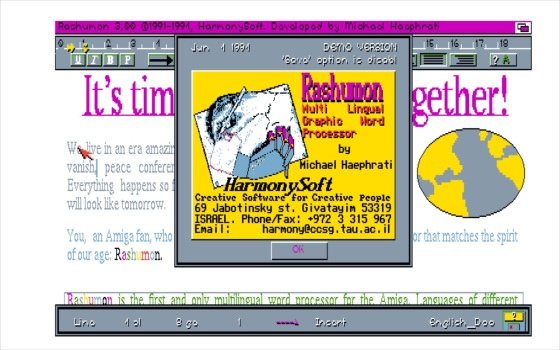 A letter to Mr. Scholz

Posted by Michael Haephrati on February 2, 1994 in Uncategorized.

A letter to Rashumon customers

We would like to congratulate you for purchasing Rashumon, the graphical multi lingual word processor for the Amiga. This page will enable you to start working immediately, without having to read the user manual. If you have any questions concerning Rashumon’s installation, please do not hesitate to call HarmonySoft.

Posted by Michael Haephrati on November 13, 1993 in Uncategorized.